No Part of this article (Including the Pictures) may be copied or used without the express permission of the Author, To do so is a criminal offence
THE PARA BADGE
Much has been written on the subject of the German Paras, some information correct, other articles less so, but very little solid information has been done on the Army Paratroopers badge. This article is aimed at addressing this situation. The award was instituted in 1937 on the 1st of September by the Commander in Chief of the Army. The badge was reputedly struck firstly in aluminium, by the firm of C E Juncker, of Berlin. What is known is that the German Armed forces soon found out that aluminium was not suitable for the purpose and these badges were replaced with more substantial metals,
(This is born out with the awards of the pilots and aircrew badges.) One source states that the Army para had the option of buying a silver badge that would then be inscribed at his own expense, if he so desired.
So far I have never seen a real one but as some Luftwaffe badges come in "800" silver I would not doubt that the "800" badges exist. The use of aluminium appears to have been withdrawn in 1937 which leaves the main question being, what, if any were the badges replaced with ?
If one uses the Pilots badge by C E Juncker as an example, It may shed some light on to the mystery. With the aluminium badge withdrawn, these were replaced by the high quality badges of nickle silver and tombak, as well as 800 silver examples. One thing is known about the German manufacturing industry, they usually supplied a choice of metals and finishes to suit all pockets! One only has to look at any original manufacturers medal catalogue to see that. It is therefore suggested that this is what would have happened with the army para badge.

Going back to the aluminium badges though, the first type that is assumed to have been awarded is called the extended claw type. This rear claw or toe was the badges main weakness and it is believed the eagle was withdrawn and replaced with the 2nd type as shown below. These badges as stated by one source, are unmarked. Research has shown that this statement is incorrect.

The one disclaimer to the previous statement is that shown in "Formans Guide to Third Reich German Awards and their Values" 2nd Edition, where it shows a named example on page 86. This badge has been traced to the original recipient. Other examples of marked Para badges have also come to light. One being an example brought back from Hamburg by a British veteran who swapped it for a packet of cigarettes in 1945 has also been traced..

As stated, these aluminium badges were brittle and prone to breaks and fractures, therefore it is not unusual to find these badges with repairs and hooks or hinges broken. The badge shown above and to the left has had such a repair with the hook being pegged and the top wing also re-soldered. 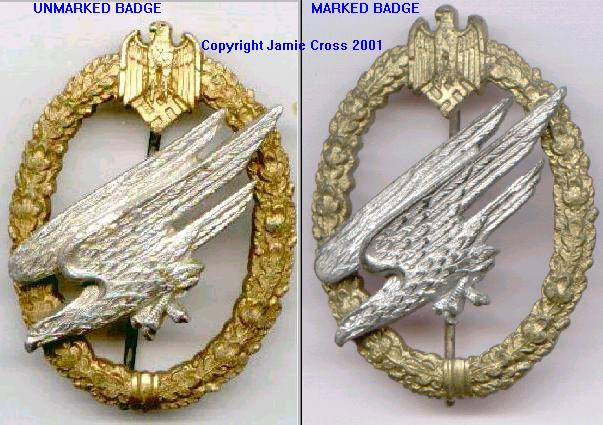 When one looks closely at the die work of this "authentic badge" and compare it to the marked type on the right a number of similarities are noted. First, look at the eagles characteristics, they are identical, the claws, eagles eye, wing fletching, even the size is the same.
Next, if we examine the wreath, there are, again a number of similarities, namely, eagles beard, lack of fletching to the eagles chest, the swastika has a fault to the bottom arm with a tiny piece of metal missing from it. On the wreath to the right hand "3" o Clock position the inside are both straight. Also on the right on the 5th Oak leaf the same blod on the leaf can be noted. Then the bow tie at the base is also off centre, with the right hand ties being less than that of the left. It is also worth pointing out that the size of both wreaths are identical with the unmarked example being slightly smaller. 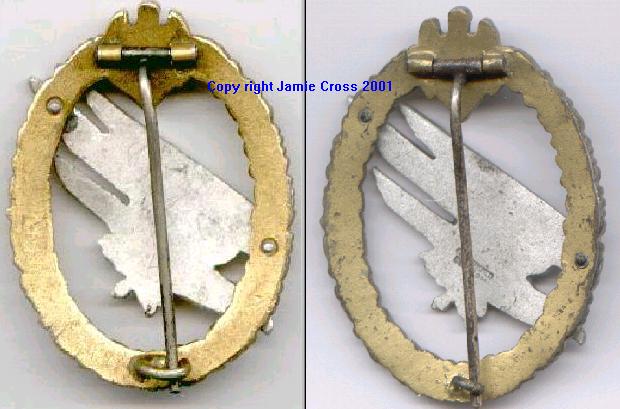 Turning the badges over, notice the over stamp on the small domed rivets and the placement of the hinge, (The hook cannot be compared as the unmarked example has had the hook replaced). Also notice the rear talons on both badges. There are other minor die marks, so from close examination of both badges it can be determined that both badges came from the same die. The next question raised then is when ? If we go back to the story of the Firm of Juncker we know that the factory was bombed and that the production of Knights Crosses was stopped. It was also assumed that the dies for all of the war badges were also destroyed, the anti partisan for one, but it would appear that the Army Paratroopers badge eagle survived the war, as did the Luftwaffe pilots wreath. Because in 1957 with the reinstitution of some Third Reich award C E Juncker. Like Steinhauer started to supply the German Government again.

Shown below is one of the first of these "New 1957 Juncker Badges" At the same time it is known that Juncker were working with Dr Klietmann to supply high quality reproductions to dealers and that there was a demand for the Army Paratroopers award like the Knights Cross (Juncker for this had got hold of the Deschler Die and had manufactured superb quality Deschler crosses with the Junckers trade mark) It is possible that as Junckers survived the war some of its dies were de-nazified whereas Deschler did not and so their dies may have been overlooked. This is only a theory though. As can be seen from the scan the eagle on our 1957 badges matches again our unmarked as well as marked badge. This is also apparent by looking at the backs of the badges, but before a big panice erupts.....

Picture of the eagles

Picture of the all three eagles 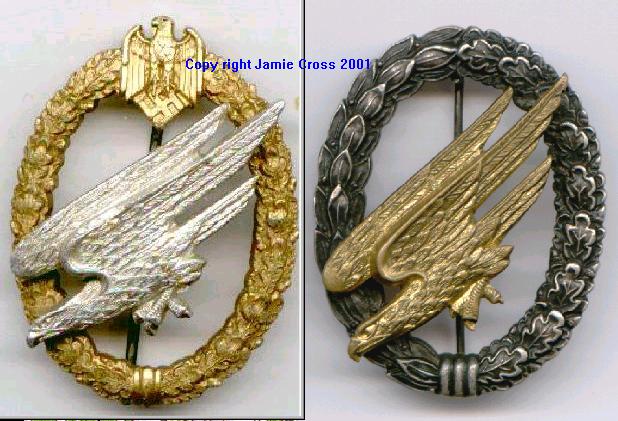 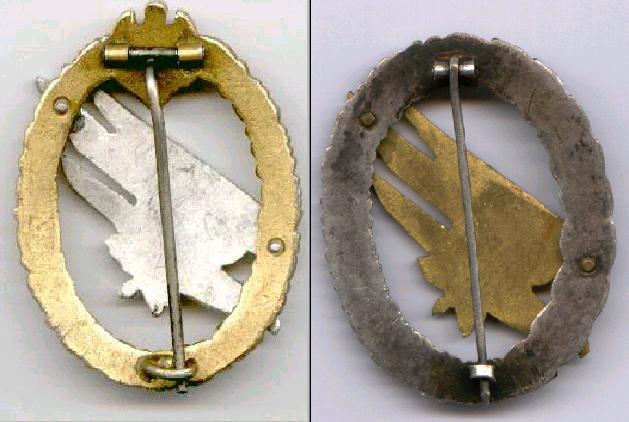 Shown below is one of the original 1960 copies as brought from Dr Klietmann in 1960, again the eagle is the same but the wreath although hand finished, is a casting taken from an original and is in fact 2.00 mm-3.00 mm smaller than both the marked and unmarked badges. Finally I have included a picture of the 1957 badge next to a CE Juncker Pilots badge so you can compare the wreaths, similarities should be apparent . 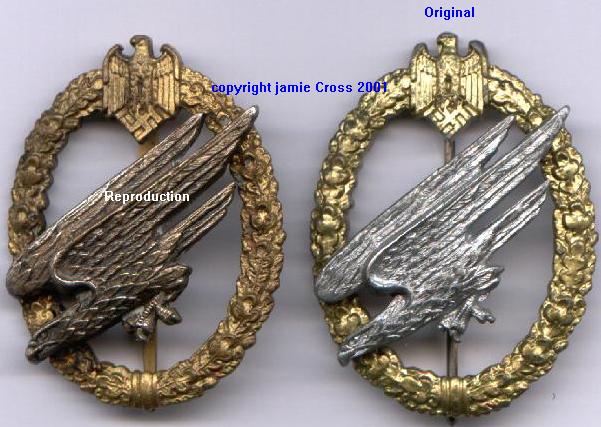 Using this information we can work out that the badges shown to the top being the marked and un marked examples are in fact both pre-war examples.

On a point made on the marking of these badges, it is worth noting that Junckers were a big firm and it is very likely that each man had a trade name punch stamp. If we take, for example the Spanish Cross, these were marked CEJ as well as silver marked in some cases . Some Pilots badges are also marked with this stamp but not all. Others have the full trade mark of C E JUNCKER BERLIN 68, others have been seen with C E JUNCKER BERLIN SW Or even C E JUNCKER BERLIN SW 68. So that in itself is not a cause for concern. What the main cause for concern is that these badges all show the same die works, flaws etc, Some people go by hinge and hook configuration to identify a maker, This is only valid up to a certain point, as hinges and hooks were manufactured by individual firms who supplied them to the medal manufactures and on the most part were not made by the medal manufacturers themselves. 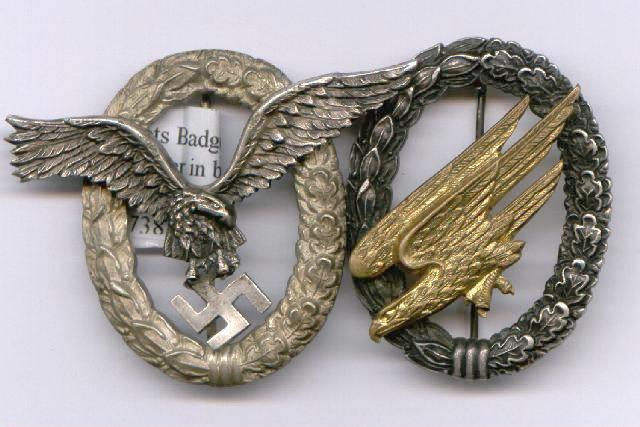 Size of badges used
Shown below is the data of the badge sizes, which may help collectors eliminate 1960s highbrids!