Or the Guerrilla Warfare Badges 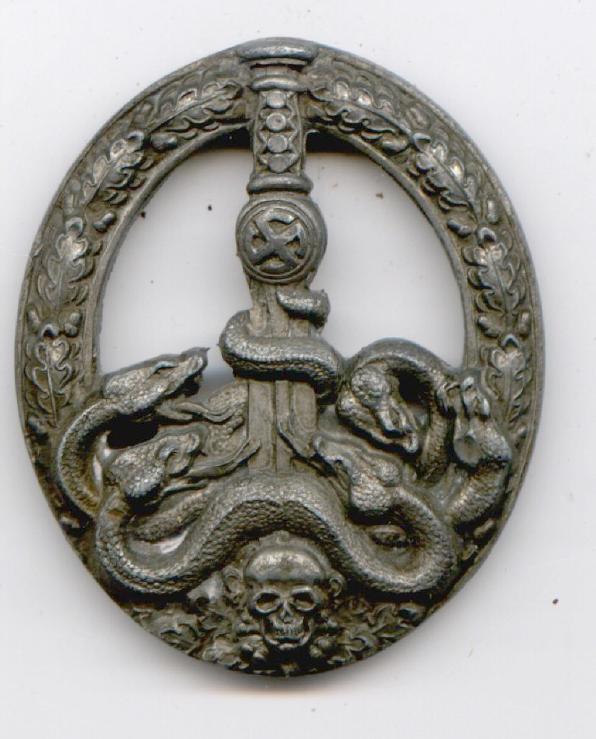 This War badge is unique in the fact that it is the only war badge to be instituted by the SS/Police and not the Wehrmacht and as such, it was introduced by the Reichsführer-SS Heinrich Himmler on 30 January 1944.

The award was intended to recognise those who had taken part in combating the growing Partisan menace which was causing so much disruption in the areas occupied by the German armed forces along with her Allies.

The badge is usually associated predominantly with battles against Soviet Partisans in the Eastern Europe and with Tito and Yugoslavia. But was of course intended for all those who had seen action against Partisans on all the fronts. Although this was an SS and Police award, it was open to all those who had fought against the Partisans and fulfilled the appropriate criteria listed. Thus it was also awarded to members of the Army, Navy, and Luftwaffe personnel as well as to SS and Police units. Authority to bestow the award lay with the High Command of each branch of the Armed Forces and with the local Höhere SS - und Polizei Führer in the case of Waffen-SS or SS and Polizei awards.

The badges design consists of a vertical oval wreath of oakleaves. The lower part of the obverse shows a writhing multi-headed serpent (Hyidra), representing the Partisans, or "Bandits" as Hitler insisted they be called. Plunged vertically into the serpents is a broad bladed sword featuring a "Sonnenrad" or mobile Sun-Wheel Swastika on its cross guard. At the base of the wreath is the deaths head emblem of the SS.

The reverse of the badge features a vertical hinged pin and hook fitting soldered to the badge. The vast majority of original examples seen of the Anti-Partisan War Badge are in a semi-hollow backed style. This version exists with both flat and needle pins. 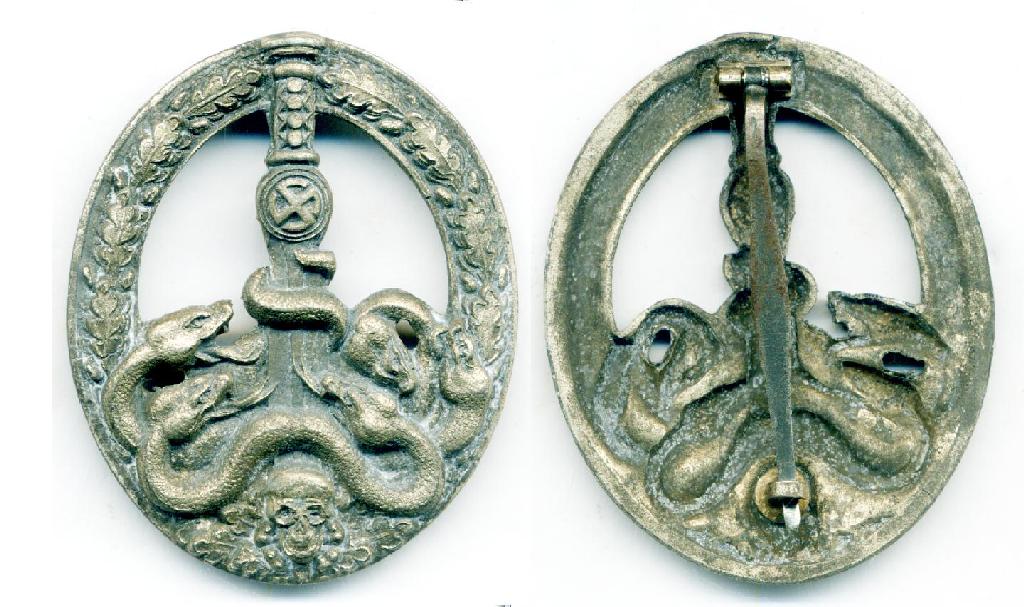 The Anti-Partisan badge front & back with a broad pin

This type will also be noted to be slightly misstruck, with the finishing die which trimmed off the excess metal, twisted and removed a nick out of the sword hilt. The number of piercings around the heads of the snakes may also vary from none to three. This type of badge is usually called the 2nd type and was believed to have been made by the M.u.Ks. Group of firms (Though in one book it is now believed to be C E Juncker of berlin that made all the differant types) 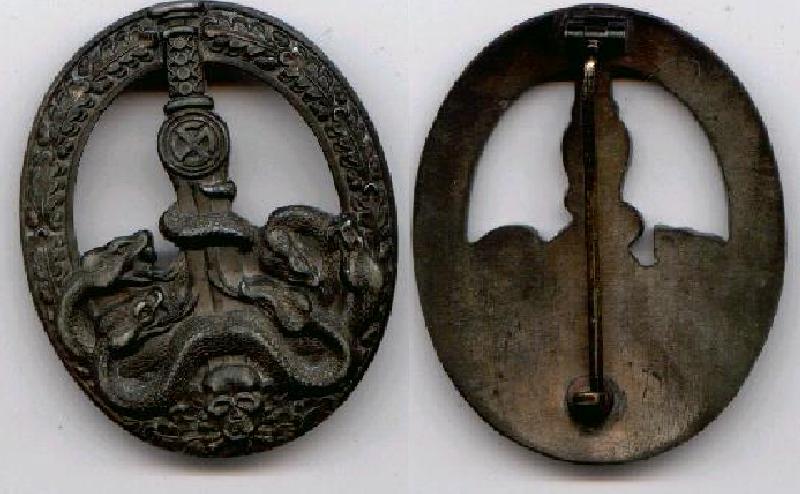 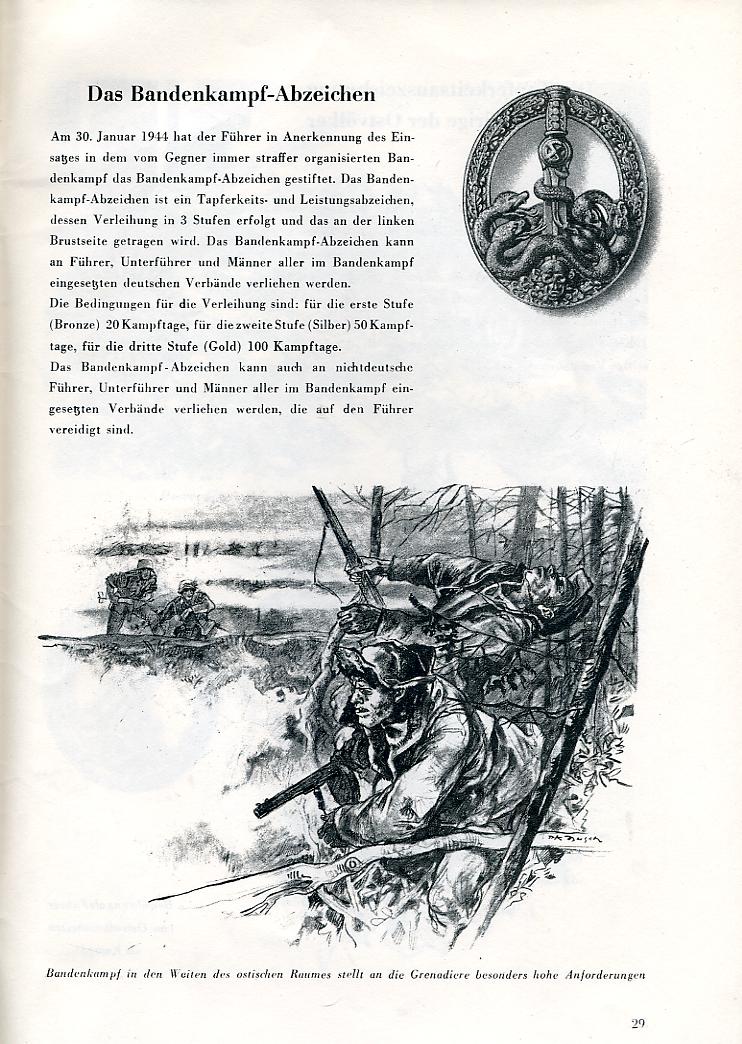 "A page from the German Booklet "Der Lohn Der Tat."

As with the M.u.Ks styles, this 1st type of badge also has a range of different pin and hook fittings as well as cut outs, though it is believed to be from a single maker, possibly Steinhaur & Luck. It must be pointed out though that this type does not have the sword hilt twist. Also this was the first type to be copied by R Souval in 1945 in zinc and as such, extra care should be taken when looking at these badges to see if the hook has been "repaired."

Not surprisingly, with the late date of institution of this award, the metal used in its construction was fine zinc. The poor adhesion of colouring to this base metal means that it is relatively rare to find any Anti-Partisan Badge with its finish intact, most by now long since having deteriorated to a dull grey finish, with only faint traces of the bronze, silver or gold finish remaining.

The Anti-Partisan War Badge was issued in three grades being in :

For Luftwaffe personnel flying missions in support of anti-Partisan operations, 30 days were required from the Bronze Grade and 75 for the Silver with the gold remaining at 150 days.

The Anti-Partisan War Badge was bestowed along with an award document. Several types are known and field issued typewritten versions also seemed to be commonly used. 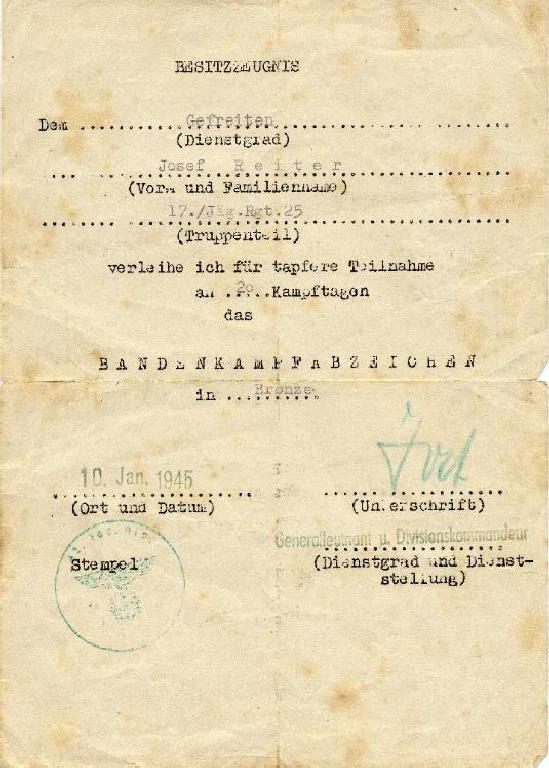 An award document for the Anti-Partisan badge

The 1957 "de-Nazified" Bandenkampfabzeichen Despite its origins as an SS award, the Bandenkampfabzeichen was included in the range of awards authorised for wear, once again after the promulgation of the 1957 regulations, relating to the wear of awards instituted during the Third Reich in a new form without the swastika.

The new version was once again made in three grades- Bronze, Silver and Gold. The new version loses both the sunwheel swastika from the hilt of the sword, and the SS deaths head emblem from the base of the wreath. 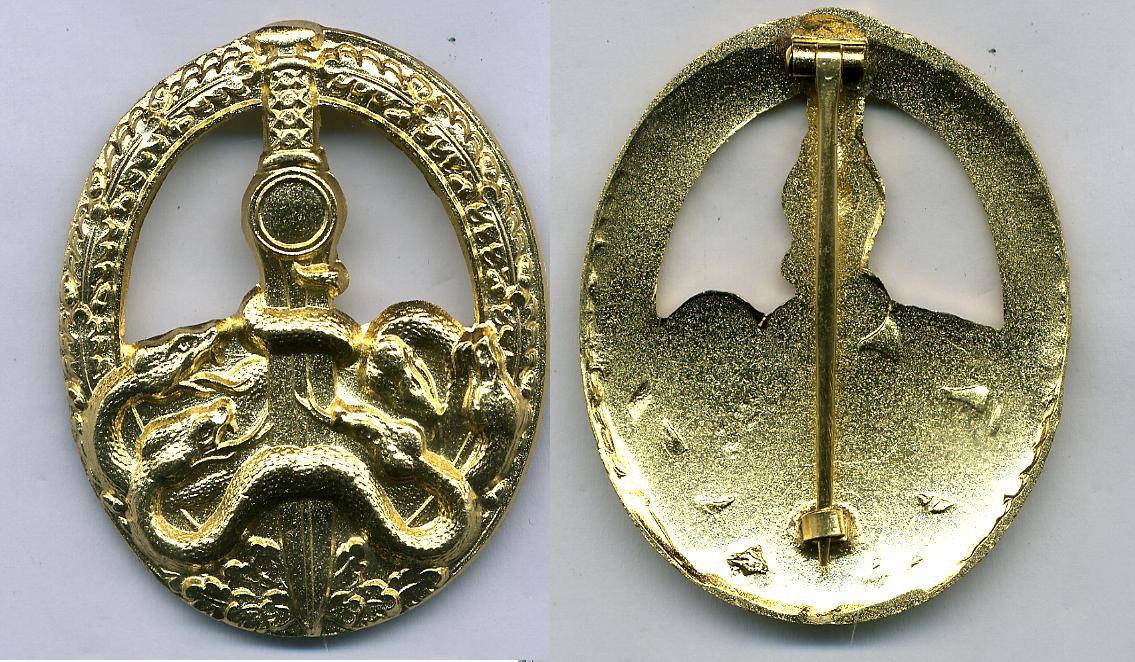 Otherwise the details remain the same and the badge appears to be copied from the original wartime "S & L" pattern. 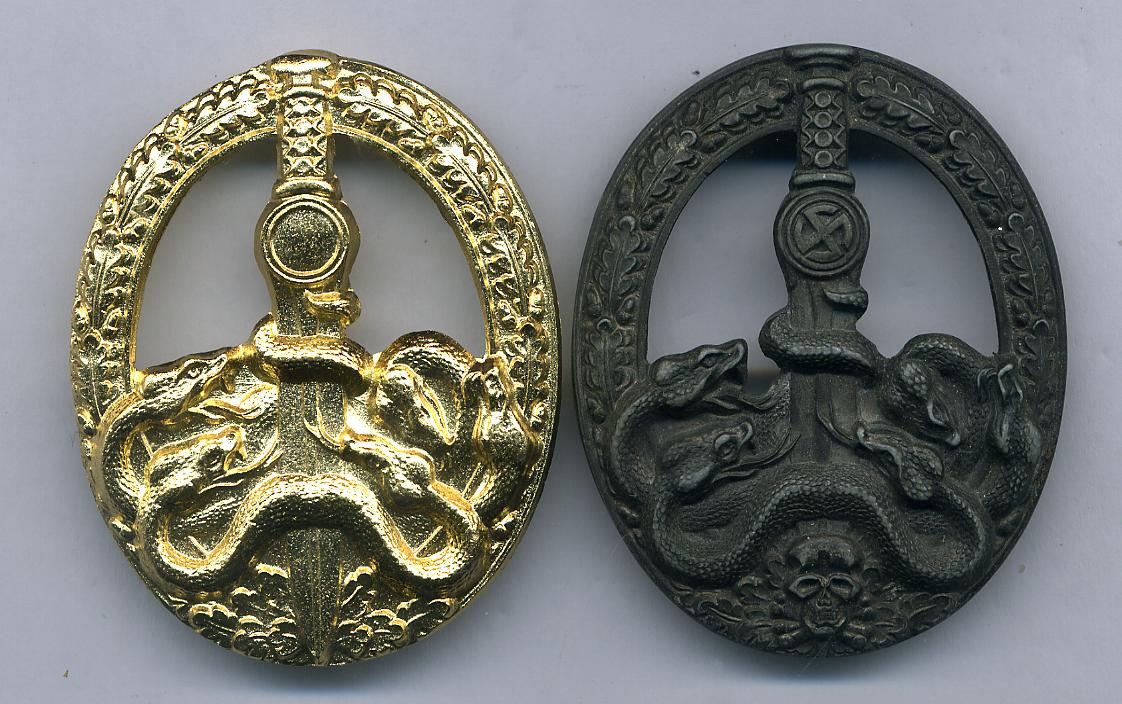 and I will send you the page link to the article.
HOME PAGE