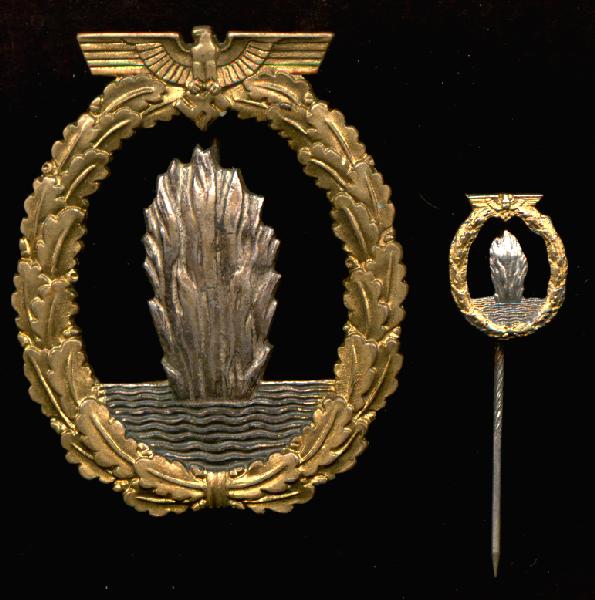 A Badge that is often overlooked and passed by for a more glamorous war badge is the humble Minesweeper award or more correctly the Minesweepers, Sub Chasers and Escort Vessels War Badge.
This badge unlike the rest of the navy series, only shows an explosion in the water and not a ship, gun or globe is to be seen.
Few people are aware of the dangers faced by the German Personnel who held this award in high regard and the hardships they had to endure to receive this war badge.

The badge was instituted by the Commander- in -Chief of the Navy Grand Admiral Raeder on the 31st August 1940, and was designed by the well known sculpture/artist Otto Placzek of Berlin.
The award criteria is

Later it was awarded after 25 days of service in hazardous waters, a fate that befell the German Forces after 1942 with their advance and retreat from Russian Operational Sortees in the Baltic and the Mediteranean. These forces were to take the brunt of the allies naval onslaught. Escort duties for Rommel`s supply lines in the Mediteranean were very hazardous, with many ships and crews lost. Most Minesweepers were coastal craft or converted fishing trawlers and not sleek new navy vessels like the E-boat and Destroyer. 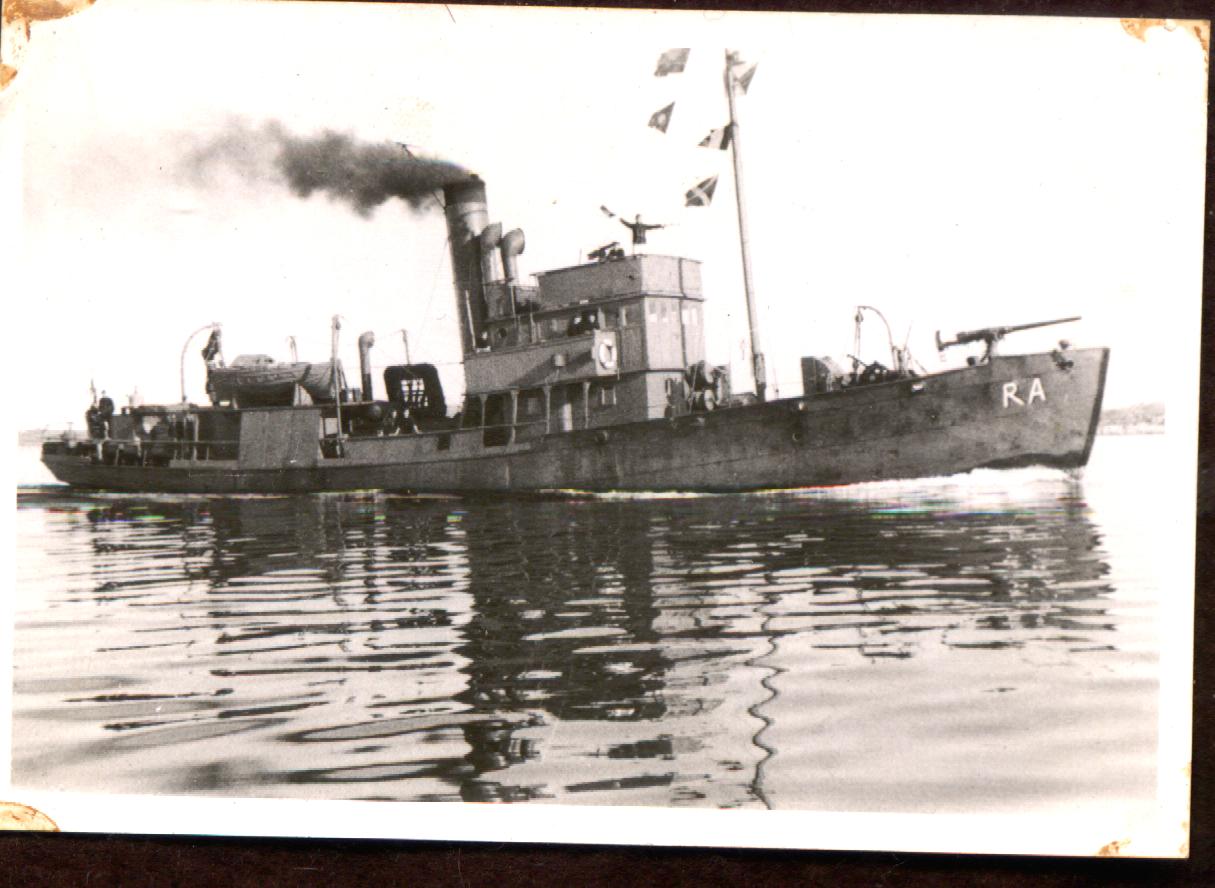 It is also surprising to note that many members of the German minesweeping floatillers volunteered to serve in the U-boat service, so they must have experienced submarine warfare from both viewpoints. The award citation shown is to one such man who served aboard a Minesweeper and later a German U-boat which he was awarded a Close Combat Clasp in bronze in 1944, amongst other decorations. 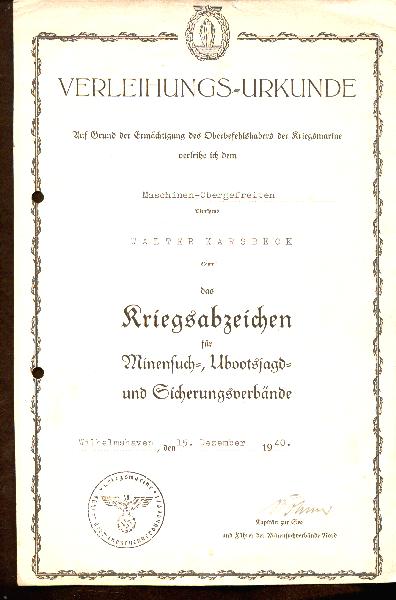 The badge was worn on the left breast pocket below any award decorations, but above sports and service medals. The badge itself in traditional navy style consists of a gilded oval wreath, with an eagle holding a swastika to the top and ties to the base. We have touched on this already, but in more detail, the central design is that of the sea, with an explosion or plume of water, with a mine being detonated. The reverse of the badge has a pin, hinge and hook arrangement that can be found either vertically, or horizontally. The horizontal badges have a small top hook to hold the badge back to the tunic. On the first badges produced by the firm of Schwerin, you will find that they also put the designer's name above their own manufacturing title, ie FEC OTTO PLACZEK, AUSF SCHWERIN BERLIN.
These early badges are made of tombak/brass and are of nice quality. As is the way with all German war badges, the metal quality went down with brass/tombak alloys giving way to zinc and silver/gilt plate was replaced by a thin silver/gilt wash. This fades over time and so you can find a grey lifeless looking badge still in mint condition. 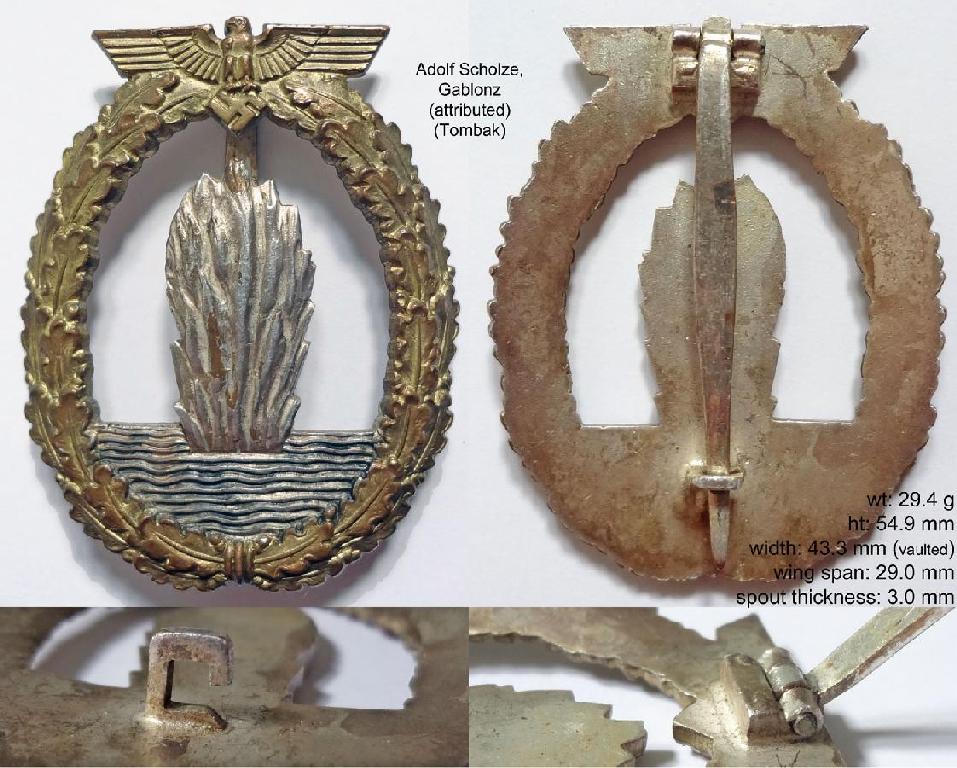 When the badge was awarded as in normal German practice, an award citation was given. Most of these have a facsimile of the badge to either the top or the bottom of the citation, with the full title of the badge. As well as this, it was noted in their sailors paybook and this is where confusion can sometimes arrive with collectors who misinterpret the U-boat hunter part for the award of a U-boat badge, a practice that has not been discouraged by a few dealers and collectors. The award also comes in a blue presentation box that sometimes contains either a 9 mm or 16 mm stickpin version. These boxed examples are quite rare and like most items, have been copied. With regards to the copies, this badge has been heavily reproduced with a prolific amount of Schwerin Minesweeper badges on the market at the moment.

The only real variant worth mentioning is that of the diamond badge. It is reputed to have been given to those German naval boat commanders who had been awarded the Knights Cross with oakleaves, of which only a handful managed to qualify. Most naval Knights Cross holders were predictably those who were in command of E-boats and U-boats. However, one such commander who may well have been awarded this coveted award, is that of Karl Fredrich Brill who was awarded his oakleaves posthumously and who may well have been given this award at the same time. These badges are just marked 800 for the silver content, with the stones inset into the swastika and not overlaid. There are many high quality copies of this variant as you can well imagine, so unless the item has proven documentation, it is best left alone.

As with many Third Reich awards that were of military orientation, this award was re-instituted in the West German pattern ie without the eagle and swastika. Other than that, the design stays the same. 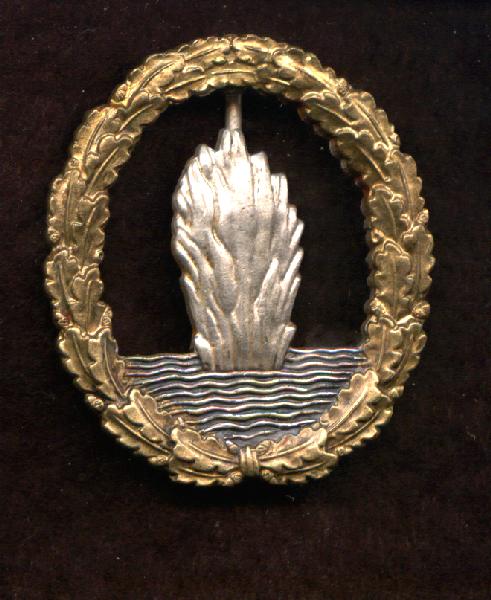