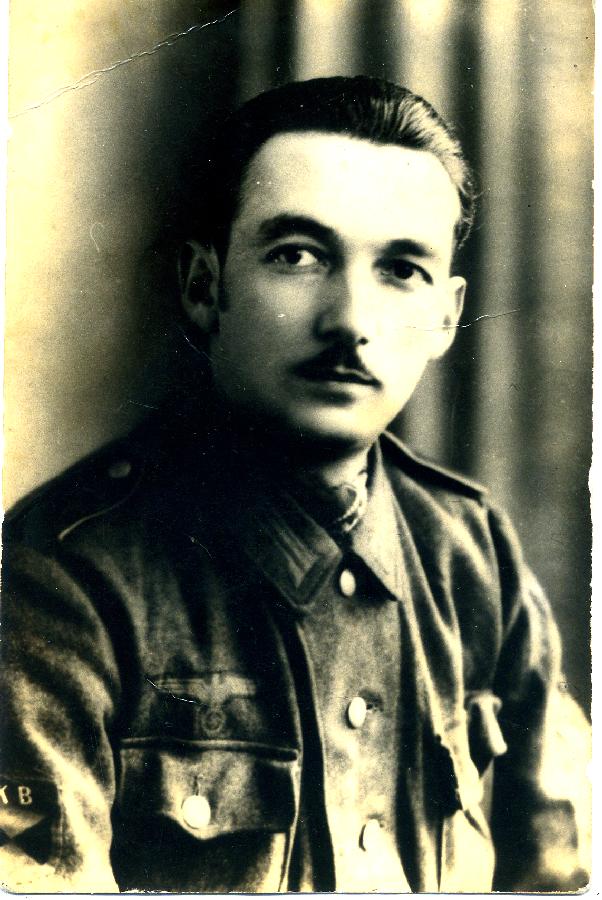 A Cossak Volunteer
As already stated in previously published articles, Hitlers invasion of Russia made the world hold its breath. Many Tsarist Russians exiled in the occupied territory volunteers for service with the German forces. Some were accepted, but the vast majority of the Eastern Volunteers came from a Country Hitler least expected to get support, the USSR. Many people do not understand why these "Russians would become a traitor". The reasons are as many as there are grains of sand, Russia was huge, many different races resided there. Communism banned Religion and many of the peoples of the Southern part were Muslims, others like the Ukraine were Royalists, others still, eg the Cossacks had little love for the Communists and their oppressive ways Individual officers of the Russian army deserted due to the officer purges. Whole Divisions went over. The general idea was it was better to volunteer for military service with the Germans than rot in a POW camp (Stalin had also given an order that no Russian was to be taken prisoner or his family suffered, a real confidence booster!) crystal clear why they joined up!

A large amount of these people greeted the Germans as Saviour as did the Latvians, Estonians etc. Many formed Auxiliary battalions to help the Germans and so the German Officers, which was to be expected, applied the same criteria of awards and medals to these Auxiliary units as well as the regulars. Iron crosses were awarded as were Assault badges.

But when Hitler got to hear of this, he had his usual say and forbade the issue of any German Medal or Badge, and all recipients of said awards were to return them.

He also banned the issue of any tunic with the Eagle and swastika to the "Slavs" and so a special National emblem was designed for the Eastern people as can be seen below .

Ostvolks Breast Emblem for the tunic

To get round the award problem, some units issued make believe awards on a regimental basis. These were worn with pride for a time until it was realized that other German units considered these to be "mickey mouse" awards. 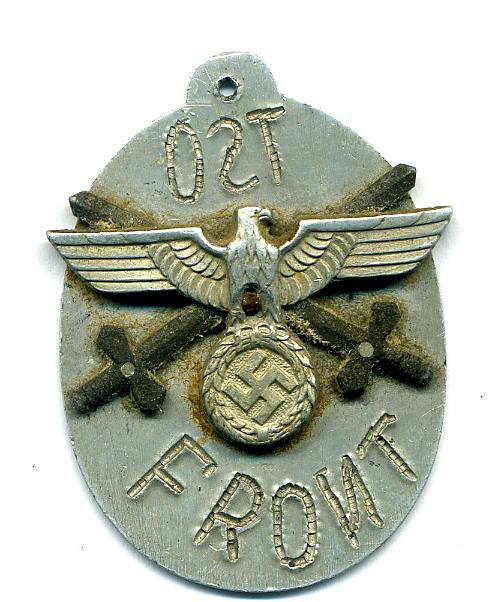 It took a great amount of pressure but finally, on the 14th of June 1942, nearly a year later, Hitler gave the approval of an official award to be given to the "Eastern People or Ostvolk"

These awards came in two classes and five grades, this is then sub divided into Military (With Swords) and Merit (without swords)
The First class came in a pin back form not unlike the Iron cross pin. The award consists of a 50mm 8 pointed star burst with two inner rope borders around a central flower. There is no swastika at all present. The award comes in two grades, Gold and Silver. Both of these come with or without swords. 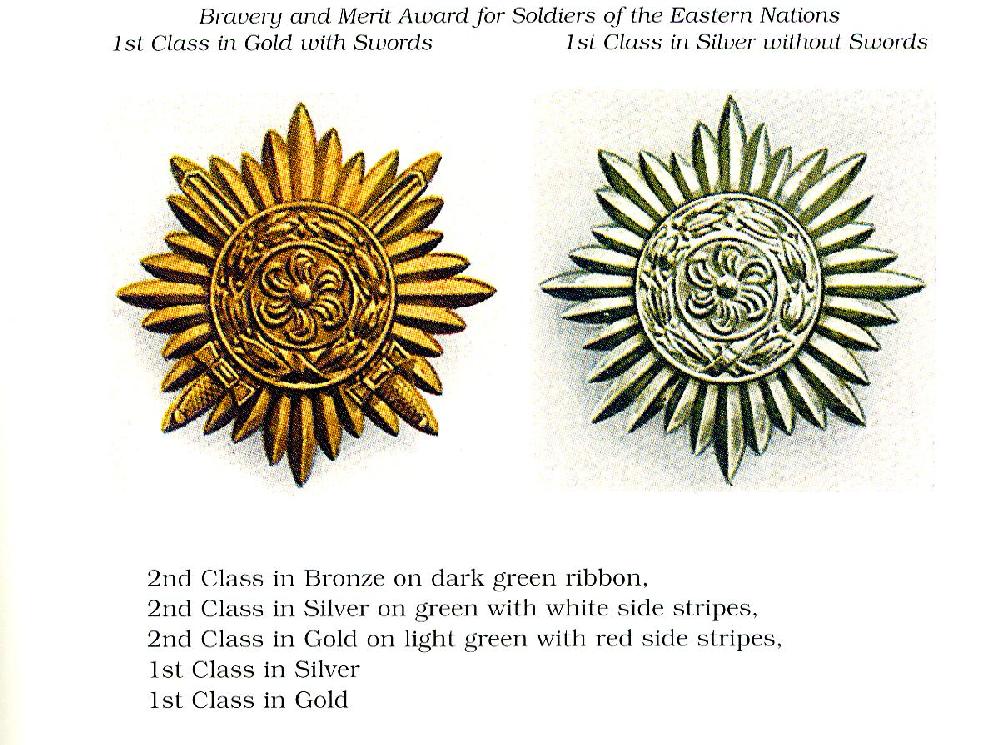 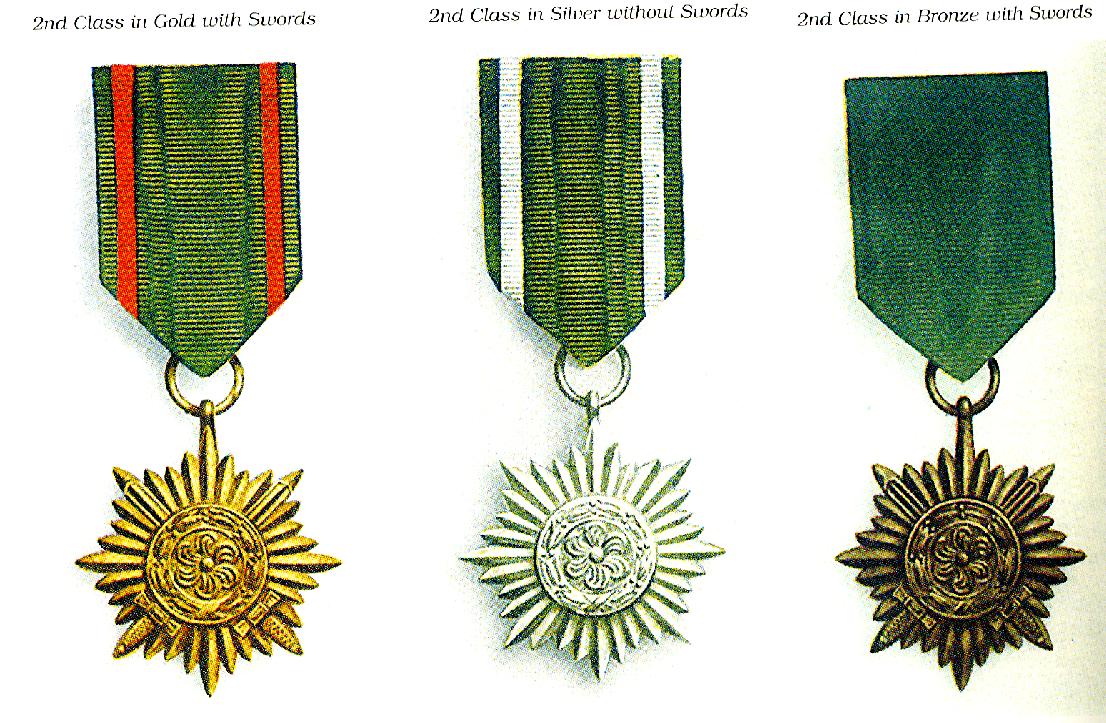 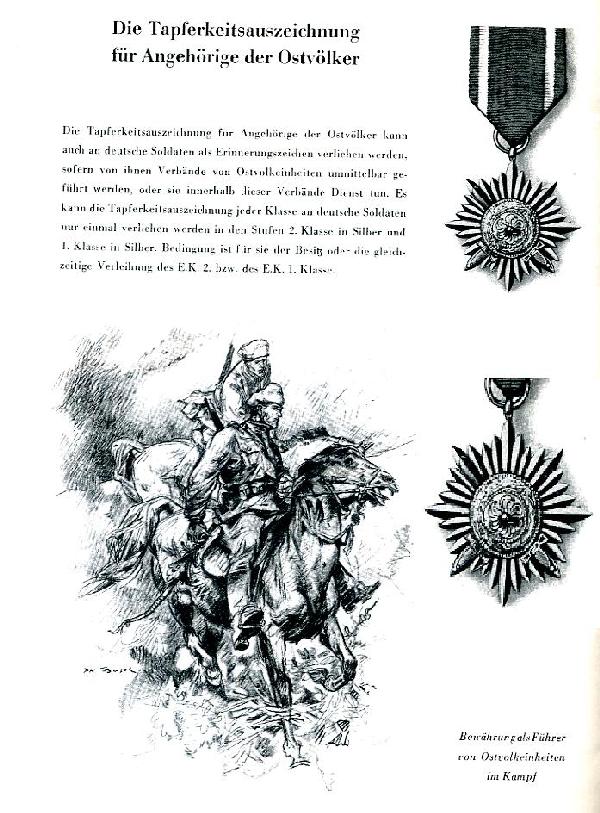 There are two interesting variations to these medals, one type consists of the medals rope border, on some it has none at all. This is believed to be a manufacturers variation and the other variation is to do with the ribbon colours:

This is probably a manufactures trial that was just issued per se. (Some believe that this ribbon is for the Vlassov Troops and in some places it is referred to as the "Vlassov ribbon". However, if this were really so, then surely the ribbon would be more common and photo records of Vlassov troops wearing this ribbon would probably have shown up by now. (Vlasov ROA numbered nearly ½ a million men by the end of the war!).

A while later it became available to the German forces in the silver grades only. The reason was two fold for this;-
1).  It created a feeling of comradeship between the German and Russian counterparts.
2).  For the award to be given to a German he had to hold the Iron Cross 2nd class and the 1st Class Iron Cross before he could be awarded the 1st Class Ostvolk award in silver. This distinction elevated the award on par to the Iron Cross and removed the "micky mouse" stigma attached to it when it was only a "Ostvolk" award.
The award was as always noted in the recipients pay book as well as a citation issued. These citations can be Bilingual (e.g. both Russian and German) and are in fact rare. 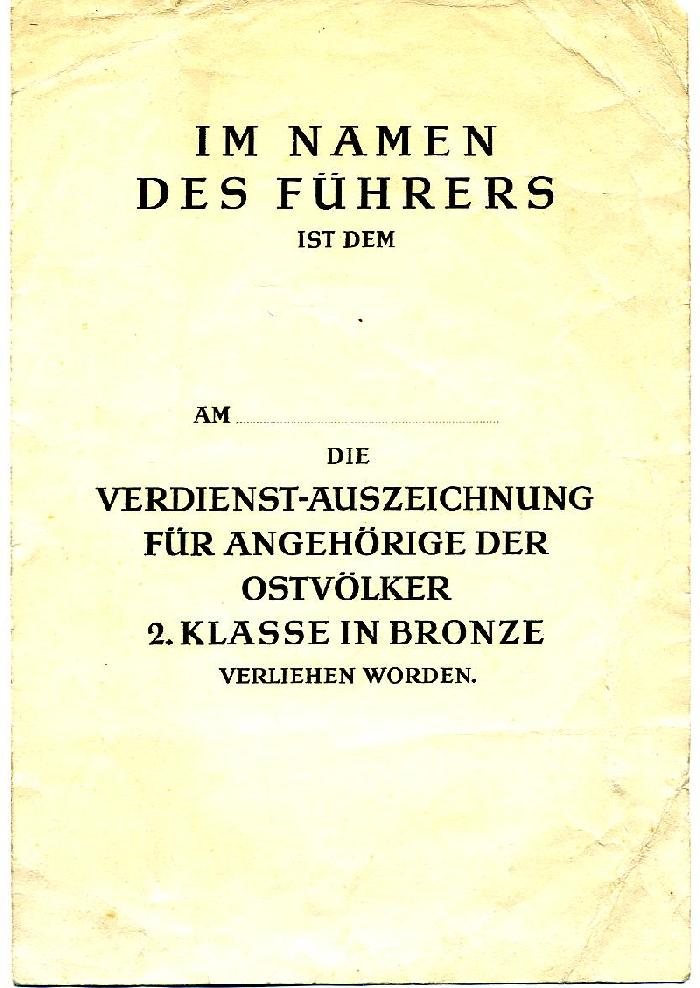 A while later Hitler, due to pressure again applied by the Armies Pro Russian element, allowed the Ostvolk the right to the Nazi Wound badge and the General Assault badge. It was not until 1944 that they were allowed the right to the Iron cross, (it is not known if those awards removed from holders in 1941 were restored or not.) As many Collectors are aware, there is a great deal of sadness attached to these awards. Due to the Yalta Agreement Britain and America agreed to hand back to the USSR all the Russian P.O.W.`s it captured. Much to the shame and horror of many of our soldiers, these orders were carried out and the award of this badge was a sure sign for a one way trip to Siberia!


Cases and Paper packets of Issue
. The first class comes in a two piece hinged box with the awards logo to the lid, this is in both gold and silver and shows whether the grade is with or without swords. The box is opened by a press stud. The under lid is lined with white silk and the base is black and has a cut out for the pin to sit in. Though some 1st Classes were also issued in a paper packet but this is rare to find 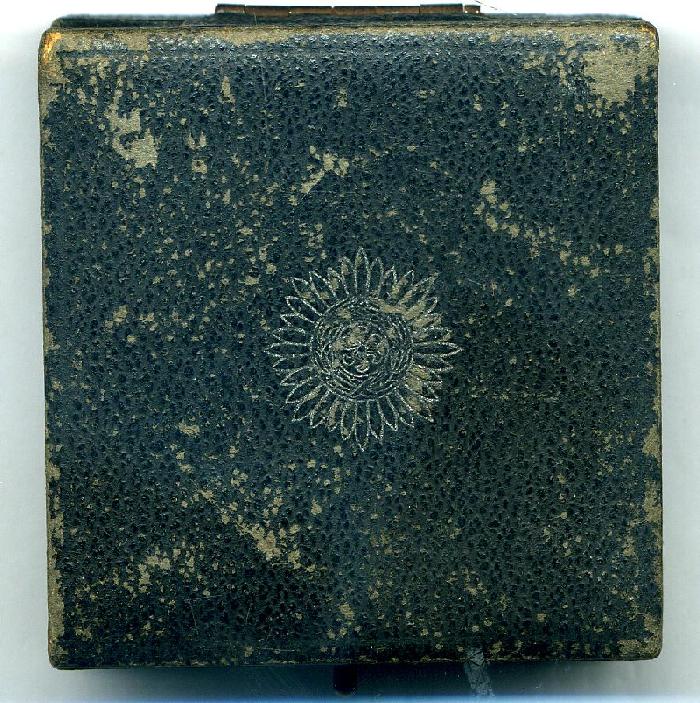 The lid of a 1st class Merit award in silver 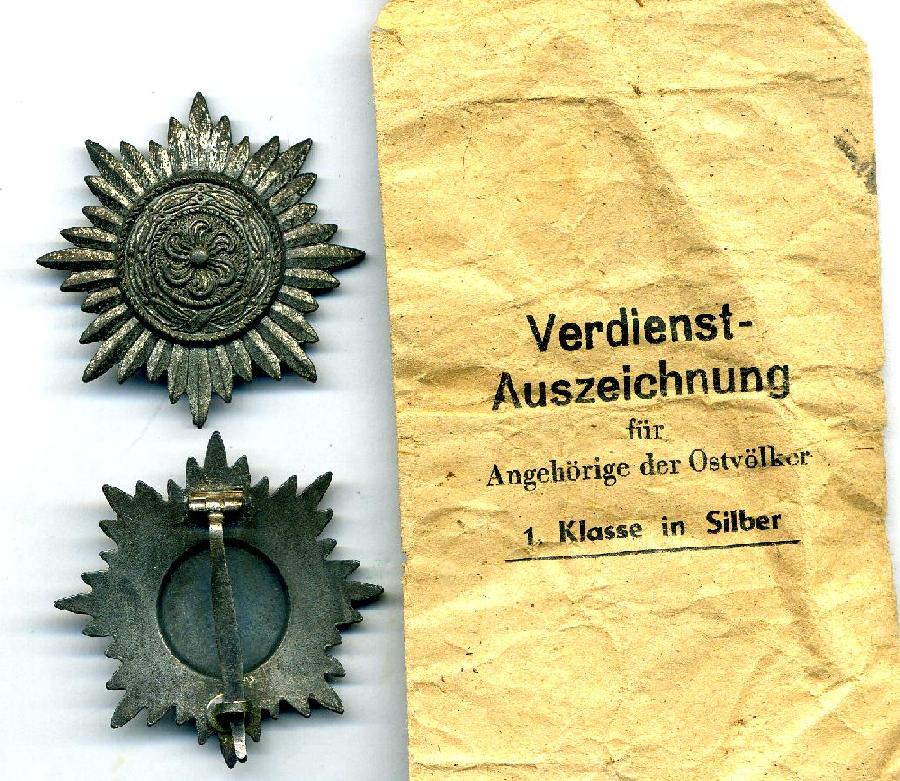 Just like the Iron Cross 2nd class, these awards also come in a paper packet with the full title printed in black to the front .

Makers Marks
So far the only manufactures mark encountered have been that of "100" both on the first class awards (under the pin) and again "100" on the Ribbon Ring.

(Please note that in Germany this awarded is regarded highly and as a consequence the price in Germany is approx. 50% higher) 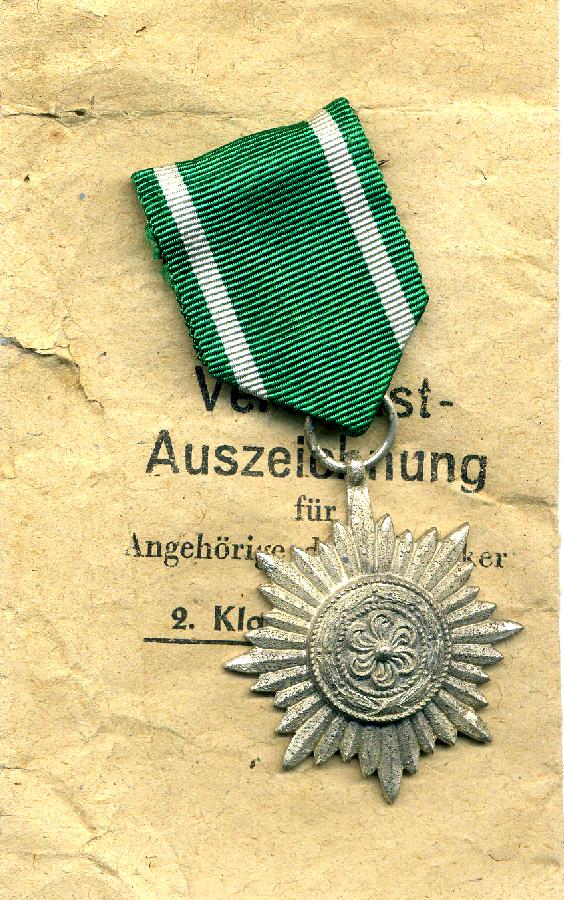